The rocks in Snow Canyon were deposited almost 200 million years ago, then solidified to become the seemingly endless calcified dunes and domes we see today. To top it off, lava flow from an ancient volcano has added to the geology of this park, leaving behind lava rocks and lava tubes in its wake.

Exploring some of the petrified dunes at Snow Canyon SP, Utah

Our favorite hike in Snow Canyon State Park was the Red Sand Trail which connected to Hidden Pinyon Trail which led to Petrified Dunes. Hidden Pinyon Trail led us through red rock formations. Petrified Dunes allowed for limitless exploring of many million year old hardened sand dunes. We continued our hike past the Petrified Dunes into BLM property towards Padre Canyon trailhead. We did not actually go into Padre Canyon, as the boys got distracted by the sandy slope between two red walls (we called it the Narrows) along the way. They would run up to the top of the slope and ride the sand down on their feet. If only we had a cardboard sled to ride those sandy slopes.

Sliding on red sand in the shadow of a red wall just past the end of Red Sand Trail, Snow Canyon, Utah

Jenny Canyon is a short slot canyon off the main road in Snow Canyon SP. Part of the trail is sandy. It gets narrow as you get into the slot canyon. It was a short but pretty canyon.

Within the slot canyon of Jenny Canyon in Snow Canyon SP, Utah 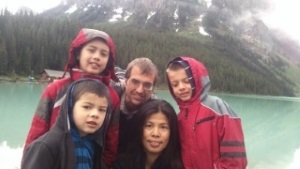